Testing 6to4 and 6rd IPv6 Islands with CDRouter

The world has spent a long time on the road to native IPv6. Fortunately, protocol advancements have mitigated the arduous task of deploying the next generation Internet.

Essentially the software counterpart to the last-mile problem, deploying IPv6 to the CPE is “the last 90%” of the work. The core Service Provider networks have always been easier, and thus earlier, to receive both hardware and software upgrades.

One idea that has gained momentum is to use the IPv4 Internet as a point-to-point network connecting IPv6 “islands” through stateless, automatic tunnels. Two very related protocols, 6to4 and the newer 6rd, provide exactly this.

What is 6to4, and how is 6rd an improvement?

RFC 3056 (6to4) and RFC 5969 (6rd) are extremely similar in design. They each allow a local IPv6 network (an “island”) to self-generate a global IPv6 prefix from the IPv4 WAN address, and to then either directly send IPv6 packets to neighboring 6to4/6rd nodes, or to the IPv6 Internet using the help of a dual-stack relay server. The IPv6 packets are always tunneled inside an IPv4 encapsulation packet.

6to4 was invented first. The IANA allocated the 2002::/16 subnet for automatic 6to4 addressing. Any address with this 16 bit prefix is 6to4. Nodes (routers and standalone hosts) with public IPv4 addresses can use 6to4 to algorithmically assign themselves a 48 bit 6to4 prefix: The 2002::/16 prefix plus the 32 bits of the IPv4 WAN address. Since the default IPv6 subnet size is /64 (which IPv6 Autoconfiguration requires), 16 bits are left to the device for arbitrary subnets. Often these bits are set to 0 or 1, but any value through FFFF is valid.

If a node is acting as a router, the router can configure itself to forward packets from the LAN, and to provide the 6to4 prefix to the LAN via Router Advertisements for Autoconfiguration. Any IPv6 capable LAN client can then forward packets to the IPv6 Internet.

In the more likely case that the destination is not a 6to4 node, but connected to the native IPv6 Internet, a special relay server must be used which has access to both IPv4 and IPv6. The relay server is a dual-stack router, announcing routes for both 192.88.99.0/24 and 2002::/16. Since these addresses are special anycast addresses, any random 6to4 relay, whichever is ‘closest’, will receive the packet, based on BGP routing algorithms. The 6to4 node sourcing the IPv6 packet encapsulates it as before, but with 192.88.99.1 set as the IPv4 destination. Similarly, packets originating from the native IPv6 Internet are randomly sent to the 2002::/16 interface of a relay server, in which the packets are encapsulated using the address of the embedded IPv4 address. 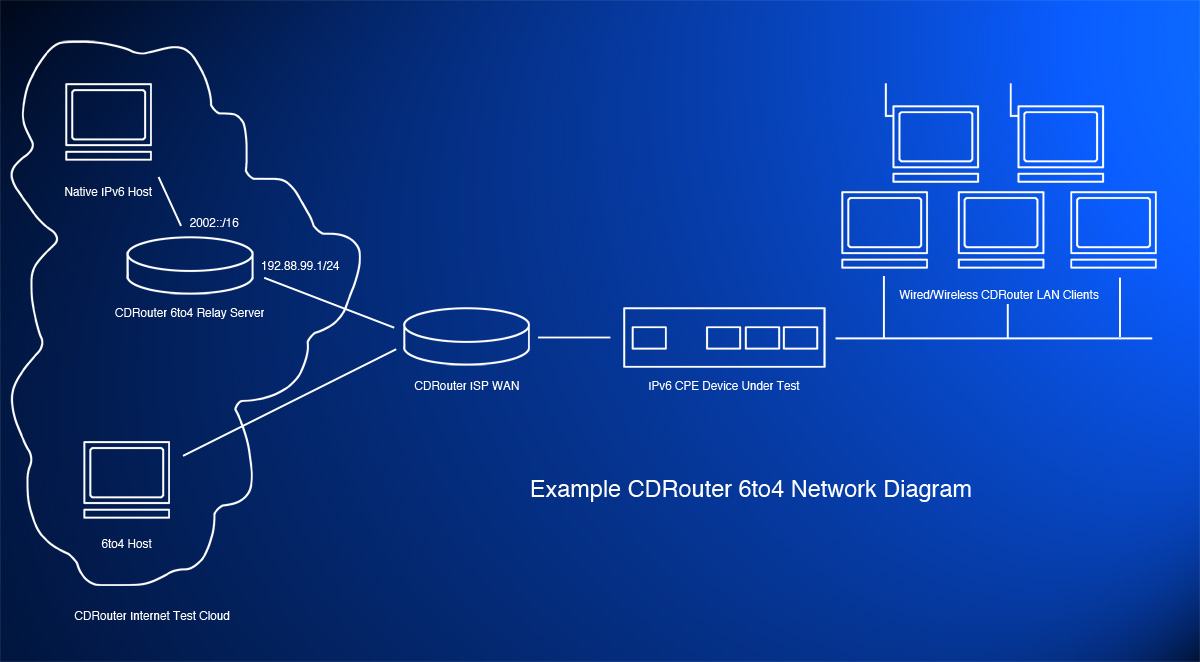 6rd (for “rapid deployment”) is an extension of 6to4 that addresses this issue. Instead of the 6to4 2002::/16 network, a Service Provider is provisioned with its own unique prefix. The Service Provider can then route packets from the Internet into its own relay server. The operational domain of 6rd is inside the Service Provider’s control, and thus ‘production quality’ IPv6 deployment is possible.

6rd clients need to be configured with the 6rd prefix assigned to the ISP, the length of the ISP prefix, and the 6rd relay address. The prefix may be no longer than 32 bits long. The 6rd client configures itself as ISP Prefix + IPv4 WAN Address + Subnet ID::/64.

The 6rd specification allows for address compression of the IPv4 WAN address. The leading bits of the address, which are unlikely to be unique within a Service Provider, can be dropped by specifying a compression bit mask length. It is enabled in CDRouter by incrementing the ipv6rdIPv4MaskLen testvar above 0, indicating the number of leading bits to drop from the prefix. 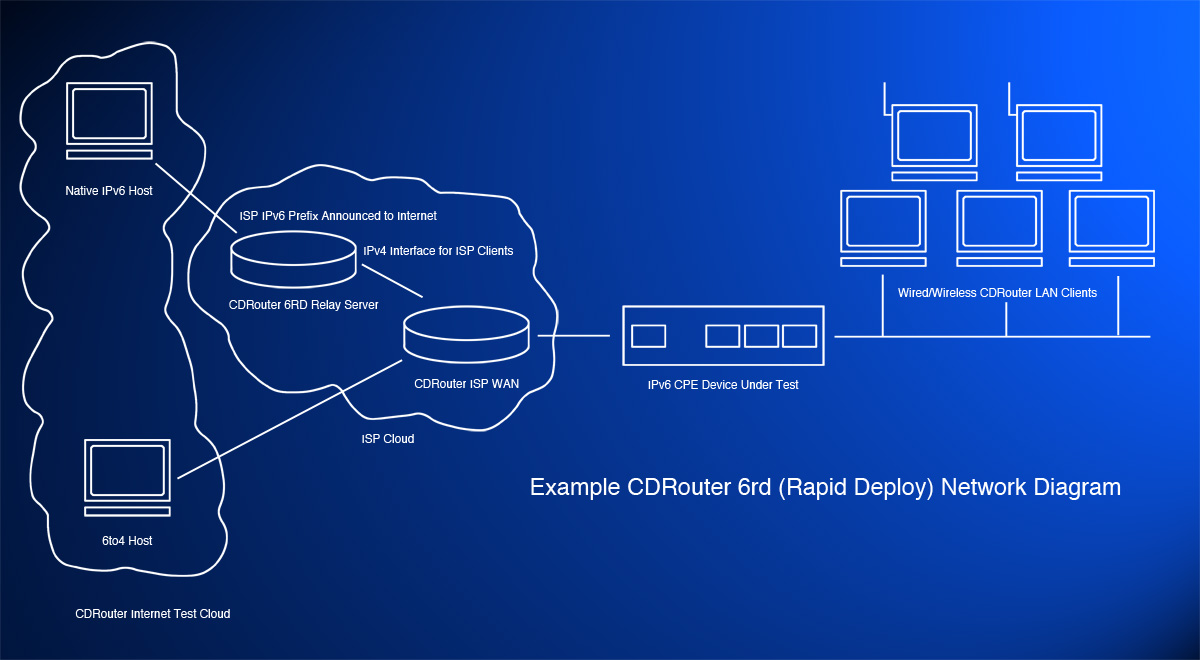 A 6rd router can forward packets directly to other 6rd nodes within the same Service Provider, or forward the packets by default to the 6rd relay server. From the IPv6 Internet, there is no distinction between 6rd addresses and are functionally identical to native IPv6 nodes. Interoperability between 6rd and 6to4 is not affected.

Using CDRouter to test 6to4 and 6rd CPEs

The configuration within CDRouter to test these protocols is very simple.

Examples of 6to4 and 6rd Configuration in CDRouter

For both 6to4 and 6rd, the remaining 64 bits of the prefix are chosen by the CPE (often user configurable) to generate the specific 64 bit prefix which will be advertised on the LAN. The length of the subnet is determined by subtracting the prefix bits used up from the 6to4 and 6rd prefixes. The 6to4 subnet must be 16 bits, but the 6rd subnet can be of arbitrary length, down to 0. If the configured subnet is shorter than the available subnet length, the leading bits are assumed to be set to zero. CDRouter can be told which bits to expect by setting the following ipv6LanSubnetId testvar, in hex:

This configuration indicates to CDRouter that the subnet should be all zeros except for the final four bits of the 64 bit prefix, which are set to ones.

If 6rd is used for the WAN and DHCPv6 is used for the LAN, there is no requirement that the subnet be strictly 64 bits, since Autoconfiguration, which requires 64 bit subnets, is not used.