Five Reasons to Move to the Pcapng Capture Format

While pcap continues to be used today, it does have some limitations that make other formats more attractive. A new format called “pcapng” has been under development for a number of years. The goal of pcapng is to address some of the shortfalls of pcap and create a flexible format for the future.

Where did Pcapng come from?

The original “.pcap” file format is part of an API for performing captures on a network interface. In Unix/Linux, this is implemented through the libpcap library. In Microsoft Windows, it is implemented through the WinPcap library. These libraries have been used to create a number of tools throughout the years, both proprietary and open sourced, but all able to output packet captures to disk using the pcap file format.

The proponents of pcapng took a different route and sought standardization. The result is an IETF (Internet Engineering Task Force) Internet Draft that specifies the “next generation” (ng) pcap file format. Through the use of standardized blocks and fields, the pcapng format is logical, extensible, and future proof.

While the pcap format does contain some information about the capture interface, the interface information is part of the common header and not stored on a per packet basis. This makes it difficult to mingle packets from different interfaces in the same capture file. The interface information for each packet is lost. This issue is solved by pcapng which allows a capture file to define multiple interfaces using “Interface Description Blocks”. Each packet can be associated with a specific interface. This opens the door to capture files with packets from multiple interfaces. This also opens the door to new analysis approaches that take advantage of this capability. 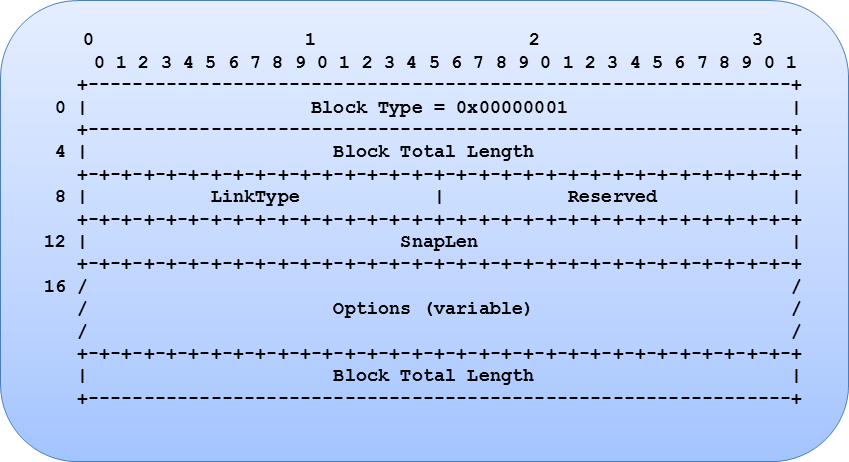 One of the major complaints of the older pcap format is its limitations with regards to resolution on packet time stamps. In the pcap format, each packet contains a header with a time resolution that is only accurate to microseconds (10^-6 seconds). While this seemed totally reasonable when this format was first created, today’s common high speed networks require higher resolution to accurately measure timestamps. Microsecond resolution provides a resolution of 999,999 packets per second; even common 1 gigabit Ethernet links can easily exceed this rate. As a result, microsecond resolution is not be able to distinguish the true timing between frames at these speeds and makes packet capture analysis much less useful.

The pcapg format overcomes pcap’s time resolution limitation by defining a flexible format that can be used to adjust the resolution. Timestamps are now expressed as a single 64 bit time unit, representing the number of time units since 1/1/1970. An associated resolution field (if_tsresol) specifies what the time units mean. The resolution defaults to microseconds (i.e. 10^-6), but may be altered by setting the if_tsresol option in the Interface Description Block, allowing resolutions much deeper for ever increasing network speeds.

Troubleshooting network traces can be difficult work, especially when trying to pass information between colleagues or customers. While CloudShark has always supported the ability to annotate packets, it is now possible to generate a pcapng file that embeds both top level and per packet comments. Tools such as Wireshark now offer the ability to edit these comments for improved analysis.

One of pcapng’s biggest advantages is it’s extendable file format. The format deploys a generic block structure that allows tools to ignore blocks that are not understood. This allows the format to evolve over time. Specific blocks are defined for interfaces and packets. Additional meta data may be stored in optional blocks such as the name resolution block or the interface statistics block. A number of experimental blocks have also been defined. Tools only need to implement a small number of blocks to support the same level of functionality as the original pcap format. The inclusion of meta data along with the packet really opens the door to a whole new set of compatible analysis tools.

While pcapng is certainly the packet capture format of the future, not all of the features of pcapng are widely implemented (and it has been around for several years). While many tools exist to perform packet capture, most of them rely on the original libpcap library to generate capture files, which still generates saved captures in the older pcap format.

That said, since the adoption of pcapng as the default file format in Wireshark and Tshark version 1.8, more applications, such as CloudShark, have arisen that are willing to take advantage of pcapng’s extensible fields. With that, more tools will begin to use this highly useful and standardized method of storing network captures.