An overview of the User Services Platform (USP/TR-369)

USP is a revolutionary standard that builds on the lessons learned from TR-069. In addition to being a faster and more flexible at meeting the existing use cases of TR-069, USP is built to enable:

A deep exploration of these use cases can be found in the Broadband Forum white paper Realizing the Promise of the Connected Home with USP.

The CDRouter USP add-on is the official test platform the Broadband Forum’s BBF.369 certification program for USP Agents. In addition, it has exhaustive validation for your implementation of the Device:2 data model. QA Cafe was involved in the development of USP early on and has built a solid base of expertise to assist you in your own development.

Watch this quick 10 minute primer on USP, its use cases, and technology:

The Broadband Forum also has a full series of workshop presentations on USP. You can register to access them here.

The specification for architecture, discovery, end-to-end message encoding, transport, and types, plus security and access control are defined in Broadband Forum TR-369 User Services Platform (USP). This can be found on the web at https://usp.technology.

The data model for describing the service elements exposed by USP Agents are defined in the Device:2 Root Data Model (published as TR-181 Issue 2). The models for CWMP and USP pull from the same common core with some minor changes for protocol-specific management objects. These models can be found at https://usp-data-models.broadband-forum.org.

The Broadband Forum maintains an open source USP Agent on which developers can base their implementations. The Agent is improved through frequent releases. It is a great starting point for implementers while building a complete solution and testing it with CDRouter.

It can be found on GitHub here: https://github.com/BroadbandForum/obuspa

USP consists of a network of Controllers and Agents that manipulate “Service Elements”. Service Elements are one or more objects defined in the Agent’s supported data model, and exposed as the Agent’s instantiated data model. A Controller may be an Autoconfiguration Server (ACS) similar to TR-069, or controlled by an application service provider to control specific elements, or even a Controller on a smartphone or in the gateway to manipulate elements in the user’s network. 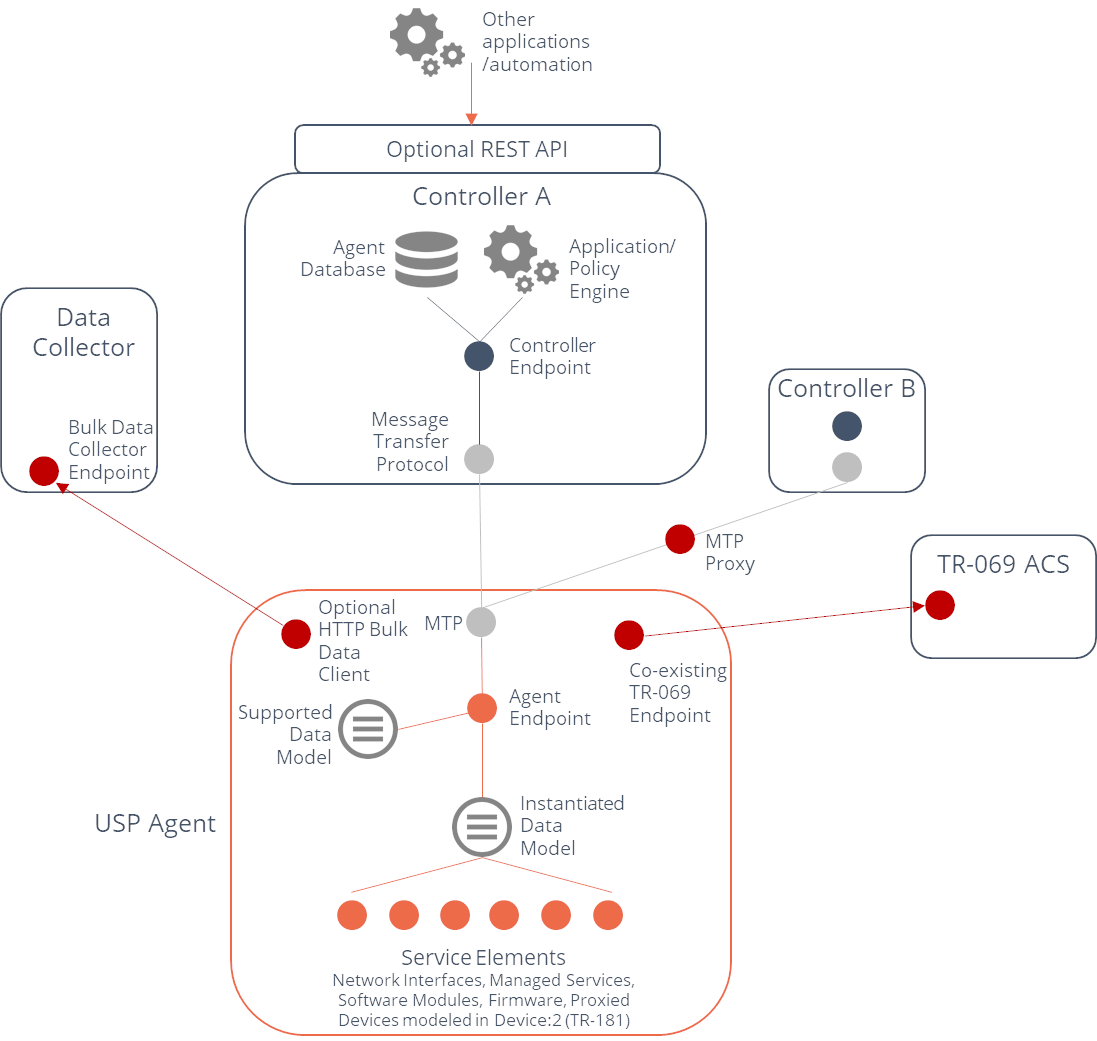 All USP messages are encapsulated in a USP record. These records are used to guarantee integrity of the USP messages and provide a layer of security when security can’t be accomplished at the message transport layer. USP Records allow an optional Session Context that allows for protected messages (payloads) and the segmentation and re-assembly of USP messages when large messages need to traverse intermediate proxies. 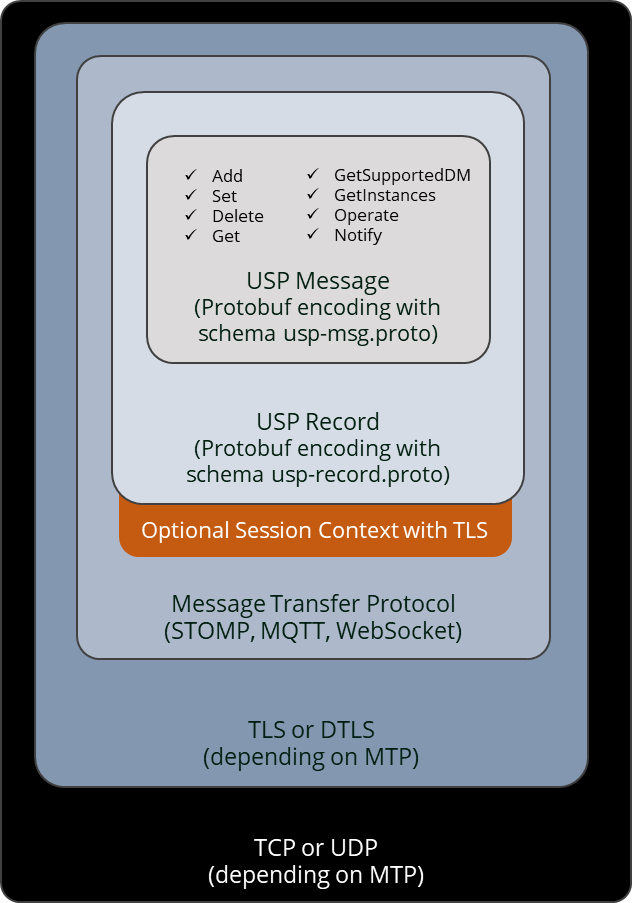 TR-069 is bound heavily to HTTP. In the design of USP, there was a desire to ensure that the protocol be cleanly layered so that transport of USP messages could be accomplished over multiple “transports” (the term Message Transfer Protocol was adopted to differentiate between message transport and the actual OSI transport layer). Message Transfer Protocols (MTPs) defined for USP 1.2 include the Simple Text-Oriented Messaging Protocol (STOMP), Message Queuing Telemetry Transport (MQTT), and WebSockets over HTTP.

Rather than sending XML documents over HTTP, USP makes use of Protocol Buffers to encode messages in transport. Protocol Buffers encoding is binary, and ends up saving significant space. It also has advantages over JSON as the encoded fields are defined in one or more schemas (.proto files) that each endpoint can use to encode or decode messages reliably and interoperably. In USP, there is a schema for the USP Record (usp-record.proto) whose payload field contains a USP Message (usp-msg.proto).

For example, this is the Get message from the usp-msg.proto schema:

One of the development goals of USP was to serve as a natural evolution of TR-069, allowing TR-069 users to seamlessly migrate to USP without having to re-architect their OSS/BSS or device/driver integration. USP makes use of the Device:2 data model with some modifications to allow the definition of commands and events with the data model.

USP attempts to handle both RESTful and non-RESTful situations with a reduced message set that is made extensible by moving many operations into the Device:2 data model. As such, it includes CRUD (Create, Read, Update, Delete) based operations, plus a Notify message for notifications to be sent from the Agent to a Controller, and a Operate message to call functions (commands) defined in the Agent’s supported data model. These messages include:

We mentioned above that Protocol Buffers saves space on the wire by creating standardized fields that are binary encoded in transport. This reduces complexity significantly.

In addition, USP messages that use the Device:2 data model (defined originally for CWMP) makes use of several features that reduce the amount of object path information that needs to be sent by the Controller and returned by the Agent:

And more, for every sub-object of the SSID object.

In USP, the Agent only needs to return:

Etc., for the remaining parameters, sub-objects, and their parameters in the Agent’s database.

If the instance number was not known or to keep consistency with multiple managed devices.

Search expressions can be much more complex than this, of course, and include different operators and other complex syntaxes defined in the specification.

In USP, sessions are optional and used for security and integrity purposes. Even when sessions are used, communication channels are “nailed up” so that there’s no need to establish a USP session for every message. Moreover, there is no need for Connection Requests to initiate communication sessions, since Controllers can send messages (which results in session initiation, if desired) directly to an Agent at any time.

Our own developer Tucker made a hilarious graphic that contrasts the “noisiness” of TR-069 versus USP: 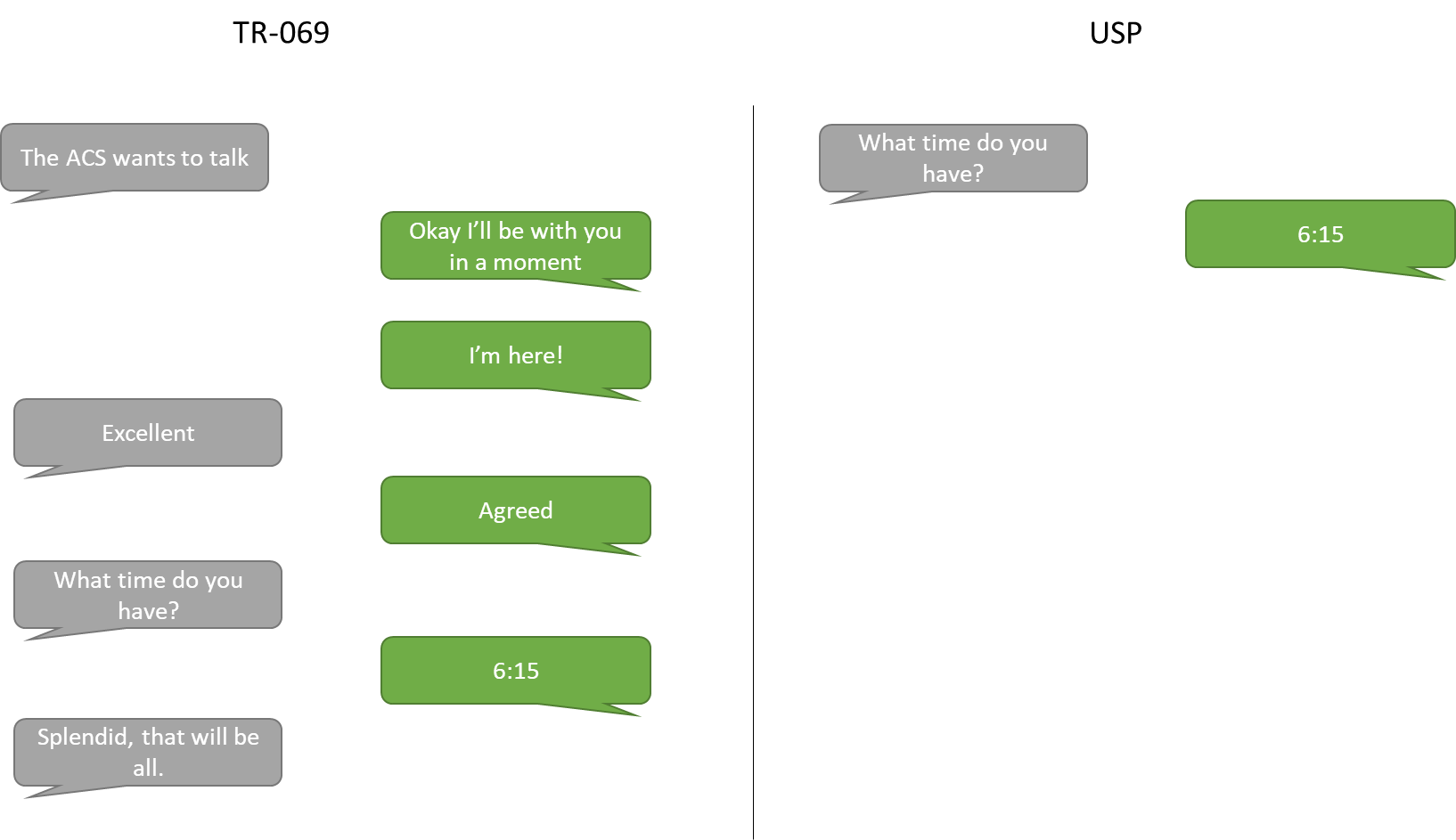 Lastly, USP opens the doors to a vastly more flexible ecosystem by exploding the one-to-one relationship that existed between a CWMP Endpoint and an ACS in TR-069. A given USP Agent can be manipulated by multiple Controllers, which may be in a Service Provider’s operational network (like today’s ACS), a Controller operated by a 3rd party application vendor, a Controller on a gateway facing the LAN, or even on an end-user’s smartphone.

USP accomplishes this by assigning access control rights to each Controller. This is configurable in the data model using the Device.LocalAgent.ControllerTrust. object, which allows the definition of Roles that may or may not apply to different objects and parameters in the Agent’s database.

For example, a Service Provider may have access rights to upgrade the firmware on a device that they have deployed in the end-user’s network. When giving monitoring control to the end-user, who wants to see a report of connected hosts, the Agent may limit a Controller on the end-user’s smartphone so it can’t accidentally mess with the firmware or other critical configuration aspects.

Get your USP Agent certified now with the official Broadband Forum test platform.