With the DOCSIS add-on, CDRouter is perfectly suited for testing and verifying the higher layer network functionality of a DOCSIS-based device under test (DUT). The basic CDRouter test setup for cable gateways is very similar to the test setup for DSL-based gateways.

Like the DSL test setup, CDRouter does not have the ability to terminate a cable gateway’s HFC WAN connection directly. As a result, a CMTS must be included in a cable gateway test setup, as opposed to a DSLAM for DSL gateways. In either setup, the function of the CMTS or DSLAM is essentially the same - to terminate the gateway DUT’s WAN connection (DOCSIS or DSL, respectively) and transparently bridge all traffic onward. 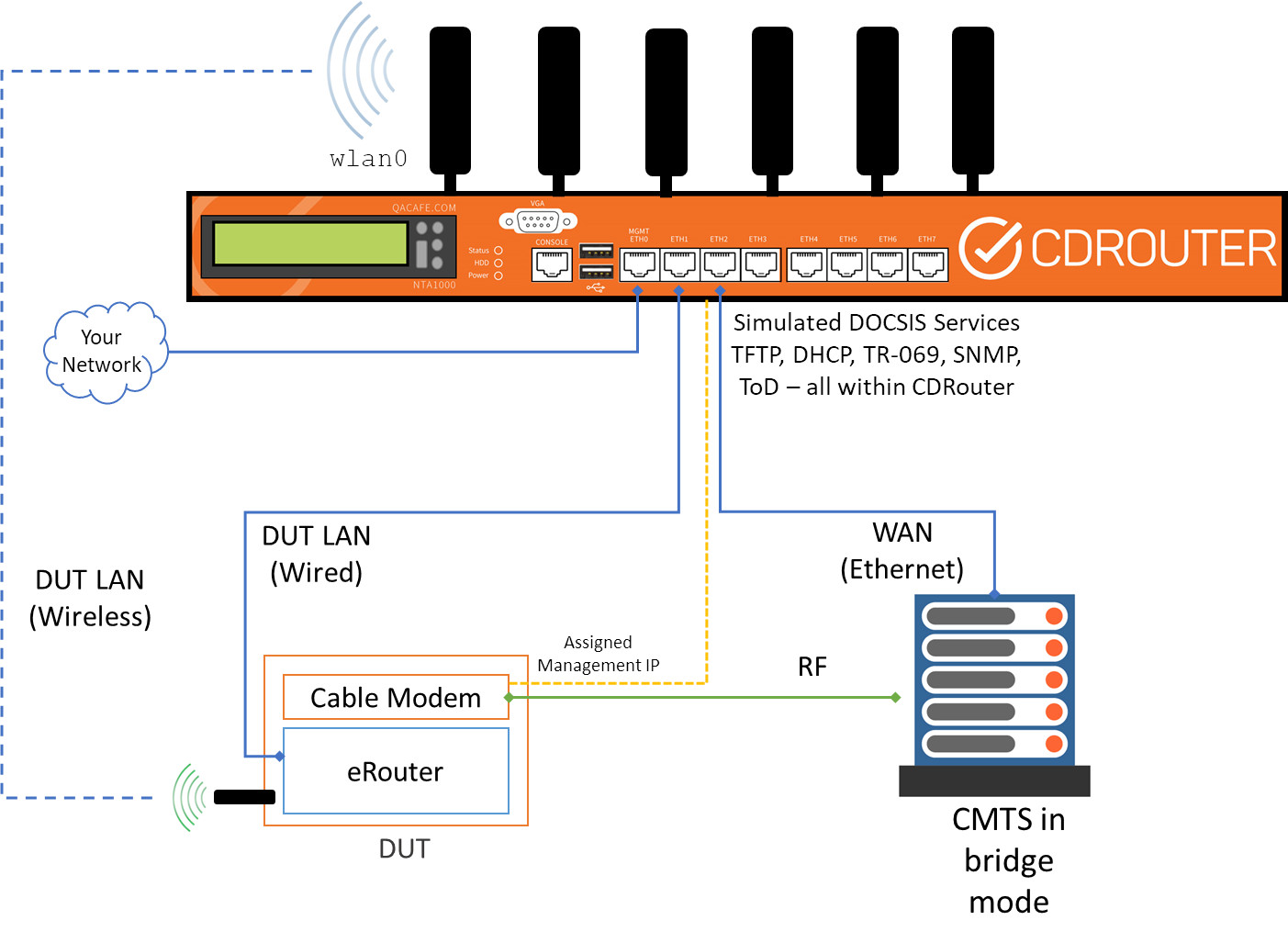 The most straightforward way to test both Cable Modems and eRouters in the same test setup is with the CDRouter DOCSIS add-on. This allows CDRouter to directly simulate the DOCSIS provisioning steps, including:

CDRouter DOCSIS still requires the use of a CMTS, best configured in bridge mode.

Using CDRouter with a Shared CMTS

In many service provider test environments, there is often a single, large CMTS shared amongst several groups and it cannot be isolated for exclusive use by CDRouter. Many times, the CMTS is also used within the production environment.

Here’s a method where test traffic from the DUT is routed through the CMTS (and potentially also the corporate or test LAN) to reach CDRouter’s WAN interface and vice versa.

In the example test setup below, the CMTS is a shared resource somewhere within the local network and cannot be isolated for exclusive use by CDRouter.

Note that this diagram shows the DUT(GW) and Cable Modem as seperate devices, but this configuration also applies to devices that have this functionality combined into one physical device. 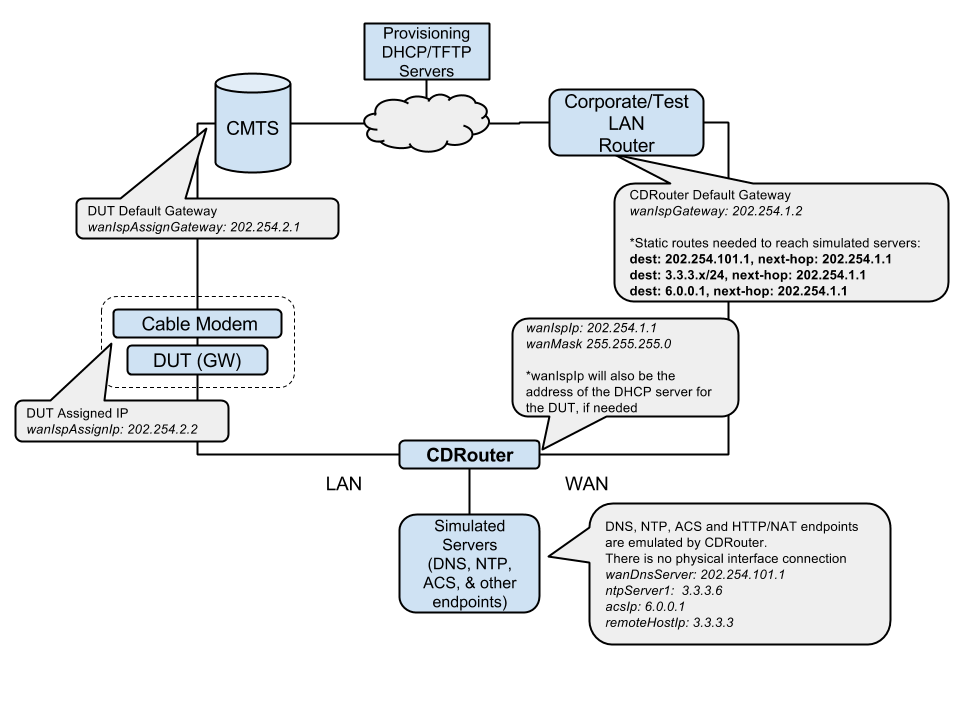 To configure CDRouter for this type of setup, you will need to ensure that testvar values in your CDRouter configuration file match your specific environment. The following subsections will highlight the required tetsvars for each relevant portion of your network environment.

The values for the testvars in the following sections will match the diagram above.

Configuration for Describing the DUT

One of the key testvar values to define is the IP address of the DUT’s WAN interface, which is desginated by testvar wanIspAssignIp in the CDRouter configuration file.

The IP address of the DUT’s WAN interface is either:

The diagrams below further illustate both typical options that may describe your particular setup. 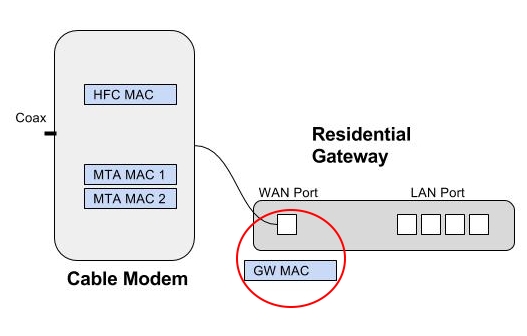 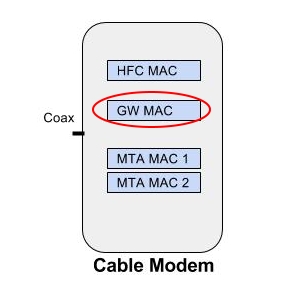 In most cases, the testvar testvar wanMode should be set to DHCP. Note that in this setup, CDRouter’s DHCP server is only able to assign an IP address to the DUT’s WAN interface (either one of the above). The Cable Modem must already be running and configured by your own provisioning DHCP server (for HFC and MTA/E-MTA) before testing can start.

When wanMode is set to DHCP, you will also have to specify the address of the next-hop router that will forward the DUT’s traffic to and from CDRouter’s WAN interface. This is designated by the testvar testvar wanIspAssignGateway.

If you are not able to segregate your DHCP server traffic from CDRouter’s, you may need to configure CDRouter to be in "static" mode (wanMode set to static) and then allow your existing network infrastructure to provision both the Cable Modem’s HFC/MTA address as well as the DUT’s Gateway address. In this case, wanDutMac and wanIspAssignGateway do not need to be specified. In this case, you must know ahead of time what the address of the DUT’s gateway is, and use that IP for the testvar wanIspAssignIp.

In the configuration file, CDRouter’s WAN address is desginated by testvar wanIspIp. This IP is likely an address on your local corporate/test LAN and should be excluded from being used by other systems on your network. It should be allocated for CDRouter use only. CDRouter will assign this value to the WAN interface on its own, but you may want to be sure the DHCP server used on your corporate/test LAN excludes it from use.

You will also need to ensure that the CMTS (and any other intermediate routers) are configured to forward test traffic to CDRouter’s WAN interface. This usually means adding static routes to treat wanIspIp as the next-hop router for any of CDRouter’s emulated WAN services, like DNS, NTP, ACS(TR-069).

Another testvar you also have to specify is the gateway address that CDRouter’s WAN interface should use to get traffic to and from the DUT. This is very likely the corporate (or test) router/gateway that routes traffic between the local network and the CMTS. The testvar testvar wanIspGateway is used to designate this address.

A sample of the relevant CDRouter configuration, based on the test setup above, is provided below. Note, there are differences between the DHCP and static setups.

In some cases, the number of subnets that are available to allocate for testing with CDRouter is constrained. It is possible to further edit CDRouter’s configuration so that less subnets are required.

The values used above are the default ones. If, for example, you can only allocate a single /24 (255.255.255.0) subnet for use with CDRouter, you would have to ensure that all the defined servers and endpoints are defined within that one subnet.

Assuming that only 10.0.1.x/24 may be allocated for a static route, then a configuration of the severs and endpoints may look something like the following:

Sample IPv6 Configuration The above setup is also posssible in an IPv6 environment and there are similar testvars that exist for IPv6: